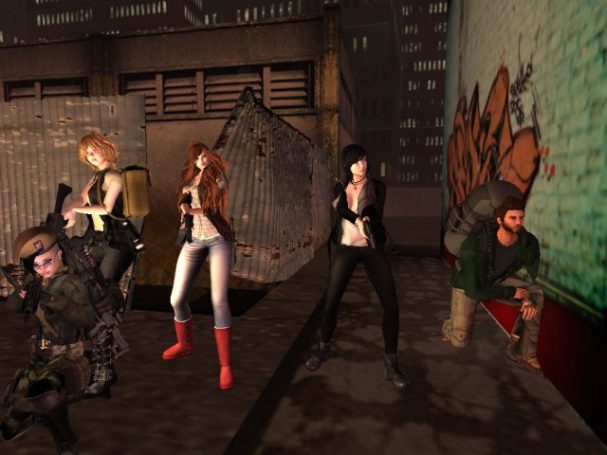 The refrain runnin through my mind at the moment about the whole thing…it could’ve gone better.

I’m here laid up in bed for the past few days. Barely moving hurts. But still, time waits for no one. So I’m back to work.

Guess I should lay it all out from the beginning.

Some days before all this went down, I’d heard from Ein that people from the Eights headed by Darla were gonna do a run over to the mainland. It had been over a week since I had been here at Arklay and all ready I had felt like I was losing my touch. That toughness I had built for myself to keep me alive out there. I knew I needed to go with them even though I didn’t even live there.

Apparently, though, when I arrived, they were more than happy to take me along. It was Ein, Darla, Guin, Alita, and myself all together. A large enough party to carry stuff, small enough to keep it quiet, and with two nurses to help patch people up.

I knew the mainlanders and raiders were just as dangerous if not more than the actual infected. Bout the only thing worse about the infected is you turn into one of them if they hurt you. The raiders would just shoot you. I think I’d rather just die than get infected.

Anyway, they all ready had a plan of things they wanted to go after. Ein was being protective of Guin and I. Don’t know if it’s because we were girls, nurses, or both. Either way, he wanted to play the hero and have us hide behind him. So not the way I tend to do things. However, Guin seemed more than nervous for the both of us. So I made sure she’d stay close to me and we’d make sure to get back together.

The run was going smoothly at first. We didn’t run into a single infected or raider on the way to a garage where they were gonna get some parts they needed. As we checked all the cars and cabinets out. That’s when things went sideways. Someone had rigged a bucket with some sort of homemade device that blew when Ein lifted it up. It made a god awful amount of noise and nearly made me deaf. Luckily there was no shrapnel to worry about. However, this did get all of the attention on us.

So, we tried to book it out of there. We came up on a corrugated metal fence. Ein was in front and tried to shoulder his way through. However, it was sturdier than it looked as he bounced off it hard enough it knocked him out for a moment or two.

He recovered in enough time to manage to get over the gap in the fence that Guin had made. But it was a near thing as we escaped from a batch of infected. Luckily enough, when I had been searching the garage, I had found an old jacket and remembered talk from the shelter head about needing clothing. At least I found one thing that could help out more than just being a nurse.

Then, we had to creep across town to the hospital. Apparently, every time they’d come here in the past, all hell had broken loose. Unfortunately for this time, it was due again.

A couple of raiders were posted in the entrance of the hospital. The first one went down easy because we got the jump on him. The other was either luckier or better trained. By the time he was down, due to Ein barreling up to the guy and beating him over the head, Alita had gotten shot in the side and I got shot in the knee. Man, still hurts like hell to think about it.

Guin jumped into action and bandaged me up but now I couldn’t run or any of that. I even needed support to get around. But she and I didn’t wanna give up yet. Since Darla and Ein were still all right, they had Alita go and get the truck we had come in, in case we needed to make a quick get away.

Darla headed off on her own into the hospital while Ein watched over Guin and I as Guin helped me hobble along. We were heading up to the second floor when we heard something downstairs. Ein moved to go check it out when Guin just handed me over to him saying she would take care of it. That left Ein having to help me around to the rooms. Luckily, we didn’t find any more traps.

Maybe the raiders thought we’d just check the first floor, get caught in a trap or two, and then just leave. Either way, we managed to find a small stash of medical supplies.  Once we were done, Ein decided we needed to hurry so he ended up picking me up and carrying me out like I was a small child. I was a little miffed but more happy to not put more pressure on my knee.

Once we got downstairs, we saw that Darla had a now bloody patch over her eye. I never got the chance to ask her if she was okay as we headed out to the waiting truck. Ein helped me into the backseat and then waited for Guin who had apparently gone to find more supplies.

Eventually, she rejoined us and we headed back out of the city.

Again, could have gone so much better. Like, not getting hurt. But there’s nothing to do about it but to try and heal up and keep moving. The apocalypse stops for no woman.