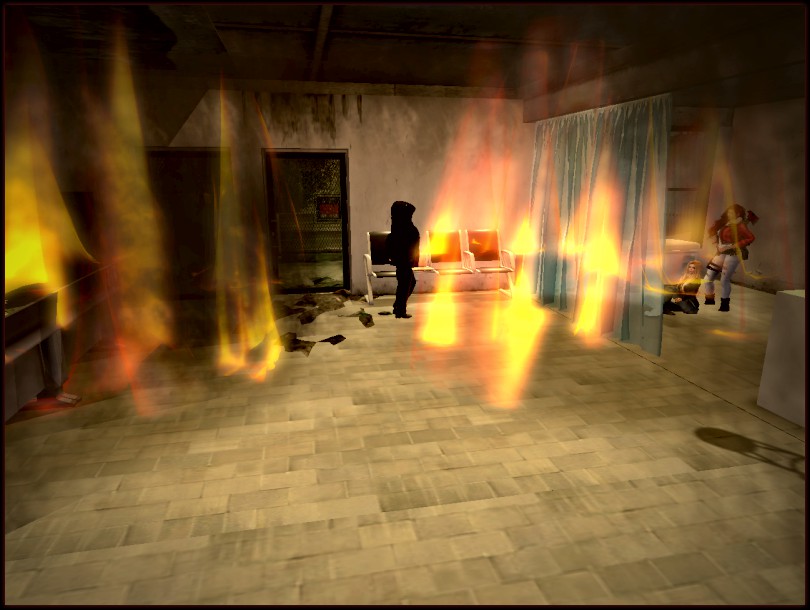 Alright now that I caught up on what happened last weekend…  the reason I haven’t written anything is i been on and off meds and stuck in a hospital bed. I went back to that town for the supplies on Peaches list.. so much happened we didn’t get to really get them all .. so i went back .. the horde was cleared to the main part of town .. i could easily get into it .. not with out fighting a bit of course but still was easier then the first time..

I gotten home early that day.. just as i walked in Kay was attempting to get a masked woman to settle down.. one who was hurt supposedly.. Vanora went to guard the door for jasper, who was sick.. poor thing.. But I went to help her the woman was responsive. She was struggling, so I went to get meds to help her ease a bit if she was in pain.. from being ‘ kicked ‘ by some man she surely was in pain… but before we knew it .. she had jumped up grabbed kay.. I wasn’t sure what was going on till i looked in kays eyes and a tear rolled down… by that time everything happened so fast.. Kay dropped..  she had stabbed her . a fatal wound as well…. all i could do was to grab her as the girl threw bombs at the desk and at us… everything happened like crazy .. all the nurses and doctors were hiding. scared for their lifes as others weren’t much help….

I screamed for Ai to get over to us.. she was hiding … kay was dying the hospital was filling with smoke and i needed her to help me .. once she finally there i had already made a choice.. one i know kay would of approved of .. she knows what its like. It was a hard choice.. I’ve grown close to kay since working there . when we arrived she listened to our stories made us leads in our group.. gave us a chance.. asked for our help in growing AES back to what it was .. So we did .. the idea of not staying and helping her killed me.. but it was that or everyone dies… the hospital would of suffered .. if she was dying i had to at-least save her hospital .. So i parked her in the corner hoping that the doctor would find her way to her before she died..  the fire were spreading the door was blocked.. the whole wall along the entrance was on fire.. The smoke was so thick. If years of training didn’t teach me just how to feel, how close you are to the fire i could of been burn.. but luckily i paid attention to my years of training… I grabbed the fire  Extinguisher and got to work .. i missed the feel of the heat.. the way the smoke clings to you.. i don’t mind the smell.. it smelt like home… and the fire stations have been my home for the past ten years… it was my everything…. with help of someone outside .. as i ran out of foam once i got the doctors path cleared…  he stuck one from the truck threw the window .. i was able to get the desk and door cleared.. by with the time it took to decide which was more important after i couldn’t get a doctor to hurry… the place was so smokey .. you couldn’t see.. i don’t know how Doctor Ai got Doctor kay to the surgery room… or if they really had any business there .. the two men who braved the smoke after followed her along  ignoring my requests for help .. there was tons of nurses and doctors around . to grab ( npcs)  but yet two untrained men wanted to assist in saving kays life… so i stayed in the smoke .. getting everyone out cause there was no time to get gear.. no time to stop .. windows had to be smashed.. boards cut down .. doors opened .. one little sick girl tried to help me get the doors propped.. she was brave and adorable in her attempt to help ..

While we was going threw this Vanora was outside.. she couldn’t hear our cries from inside.. ben also had walked up and also a guy named Conner i’m told .. he was the one who shoved the fire Extinguisher in to me .. together van and ben took the girl down .. the girl whos name was izzy.. who is now in custdy sitting in the jail cell .. waiting to see what fate has in store for her..

I Damaged my lungs in this .. the next day i hurt so bad .. but i thought if i took breathing treatments it would be fine..no needed to get anyone to look at me . no one noticed i was sick either… no one looked closely enough to the girl who couldn’t’ breath due to her coughing .. spend the day up on the roof with my love.. even in the rain .. once we got down . things changed .. the climb down was to much for me . my finger tips and my lips started to turn blue.. as i couldn’t breath anymore .. luckily mark had walked out just in time… even if i refused help he wasn’t having it .. man handling me up to the second floor ICU he put a mask and a machine on me .. but i couldn’t breath even still ..  my world was spinning and i vomited… my chest was burning my throat still hurts like a bitch .. i was in panic mode.. My lungs weren’t getting air at all .. He had to bring out the Cpap… forcing the air into my lungs…. it was sweet and bitter at the same time cause i was in sooo much pain… i been here a few days now

I got bored a day ago … tried to sneck down to my office.. but got caught by mark himself .. i ran back to my bed.. it was to soon for that .. the moment he got back he fussed at me he knew something was up… my body was in distress all over again… if only he knew what a trouble maker i was .. lol.. but he was there protecting me yet again… that same night kay was wheeled down to be socialized.. she was in so much pain.. but refused the meds.. mark checked her over .. there was puss and coloring was all wrong .. she had been bleeding internally and no thought to check it . I once again got out of bed sat with her while mark worked.. the poor thing was in so much pain..

This has been my week though .. atleast the highlights of it.. I Think its time for a fire safety class for all hospital members