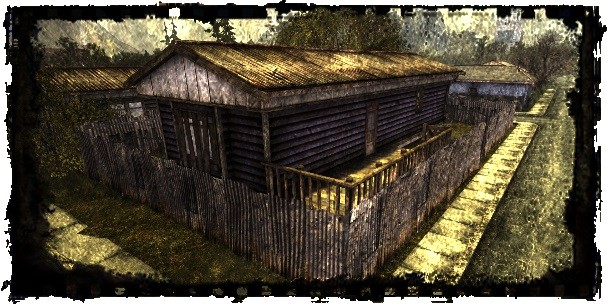 I’ve skipped a few days making an update in this thing. I’ve been pretty busy and also, there’s a lot of stuff that just ain’t worth mentioning.

Few days ago, at some god forsaken hour of the night, I ended up strolling around town. Saw someone was standing out at Sam n’ Ella’s diner. Had a few bucks in my pocket, so thought maybe I should treat myself.

Woman there behind the counter’s Lettie. Introduced herself saying she was a part of the CIA, like with the government I thought. Thought she was joking. Turned out though, wasn’t quite THAT CIA. Culinary Institute of America’s what she meant. She didn’t finish, but she had some time under her belt. It showed too.

Starting to rain as she was cooking me up a steak. Took shelter underneath the tent, but the rain was just coming down too hard. Moved into the kitchen then.

Smell of that steak cooking was nice on the nose. I can see why folks come around for the cooking here. Even the dead ones took notice. Heard some grunts come from outside the wall. Looked outside, saw three dead guys shucking around. Then it turned into five. Then six. They was starting to form a small mob out there. Guess though, they really couldn’t find where the smell was coming from. None came up to pound on the wall.

Lettie wanted to see what all the action was about outside. Steak was done then, so she could afford the time. She got up to that wall and things became a little too close and personal to my liking. Don’t know if it was deliberate the way she was brushing up against me. Think it was though. If she was trying to start something, she was trying real hard. Little does she know!

When the rain let up, we both moved outside. Paid my tab and even gave Lettie a tip. She was pushy to write something on a comment card, so I filled one out for her.

‘Lettie is the best cook. She deserves a raise.’

Made my way home after that. Had to be real careful out there that night. The dead were a little more active than usual. Might of been a combination of the weather and the cooking. Had to take a different way home than usual, but didn’t have too much trouble getting back.

Highlight of the day after was running into Adrianne again. She was just milling about, looking for something to do I guess. She wasn’t in too good of shape though. Had bandages on both her legs. Didn’t say what happened, but I figure she ran into something bad out there. Still, didn’t stop her from pitching a helpful hand though.

Talked her into helping me out build up my place. Got all the parts, but we need a ladder to get to them windows. Got to board them up. Jake from the Doll House said he’d lend me their ladder. Went on over there to collect on that favor.

Ran into Jake outside the place. Missy was inside. Was quick work getting them to let me borrow the thing. Didn’t stay for long. Before leaving though, extended and invite to them to come over some time. Maybe I’ll even have a party.

Carried the ladder home with Adrianne. She couldn’t stick around anymore after that. Felt too tired. She left and I called it a day as well.

Next day, I worked my usual routine at the shelter. There wasn’t too much to talk about. No one really dropped by. Nothing to report there, until night fall.

I found night time’s a good time for picking. Folks usually lay out their trash some time around sunset. There ain’t too many scavengers willing to risk themselves to dig around in the dark. There’s a lot of danger out there at night: the walking dead, wild animals, raiders. It’s enough to keep most people out of the trash.

Was running around, looking for a gate, when I came upon Vince. He had just been taking a leisurely stroll around. Found that kind of weird. Since he wasn’t up to anything real productive, I invited him along to salvage around with me. Didn’t take long to find what we was looking for.

Came across a house in the suburbs with a big iron gate leading into the backyard. It was perfect for what I needed. Didn’t want to take it though, if someone else claimed this house. Peeked in the windows, but far as I could tell no one was home nor living there. Vince proceeded then to fix that gate off its hinges. The whole time though, he complained we was stealing. It ain’t stealing if no one owns it!

Vince is real concerned about safety, my safety in particular. Asked if I had a gun yet. Told him no. Out of the goodness of his heart, he just up and lent me one of his pieces. Tried to resist it at first, but just gave in. Soon as I get a gun of my own, I’ll have to return this one to him. On top of that gun, he even gave me a pretty decent crowbar that’s been filed down sharp on one end. That’ll be real handy.

After that exchange, we pulled that gate right off. Made a lot of noise in doing so. Had to keep a real careful eye out in case anyone or anything was coming. Sure enough, three dead folks came our way. They shambled after us all the way towards the house. Wasn’t certain if they’d come our way for awhile. They took their time, but eventually they were making their way to find us.

With some clever distraction, we got the dead ones to turn around. Suddenly, rocks being thrown at the garage door across the street became real interesting to them. As they turned away, Vince came up with a plan and we acted it out.

With that dirty work done, it was time to get back to business. Didn’t have no trouble hooking up some sheet metal to the already existing pieces of the fence. Gate went on without a hitch. Vince couldn’t stick around long enough to help board up the windows. Offered he could crash on the couch until sun up, but he declined. Took off right after that.

Next morning, I boarded up them windows myself. Took a long while to do it. There were quite a few breaks in between putting up the planks. Didn’t want to make too much noise all at once to attract unwanted attention. Was a little bit in the afternoon when I finished. Day wasn’t done yet though, for there were a few tasks left. Returned the ladder to the Doll House and went to work right after.

Place was kind of quiet that day. Not too many folks came in. Met a doctor though by name Connolly. Actually met him not too long ago in the hospital’s lobby. He was getting real cute with another nurse. Not wanting to be a third wheel, I just left them to do their thing.

Connolly’s got some opinions on the shelter. Thinks it’s kind of dangerous to have so many folks in one place. Sees the shelter as something necessary though. It’s kind of a toss up on things, really. We just need to try and hold out for as long as everything lasts. That was about as much as we talked about before he moved on.

And that was that for that day. Sun was starting to come down and I went home. Stayed there throughout the night. Slept a whole lot better that night in a fortified house. I tell you what, good fences make good neighbors.

Unfortunately though, I missed out on bath day. Have to make up for that some time this week.

Morning came, and I took much of today as time off. I been running around too much and just needed to rest a bit. Couldn’t spend all my time at home though, for the hospital was having a meeting some time in the afternoon.

Most of everyone showed up. Kay was there to lead things off. Not a lot of notes were made about the shelter. It just needs a new director is all. That ain’t gonna be me, not now at least. I’m too new and I’ve got to settle myself down a bit more here. It’s gonna have to be someone else for now.

A lot of what was talked about were reminders to doctors and nurses. They have to wear their scrubs. They need to be busy, or at least look busy. Water ain’t free no more, but jugs of it are for sale pretty cheap though. That’s all there really was to talk about. Everyone, including myself, cleared out after that.

After the meeting, and in my off hours, I been scavenging. Came up with some pretty good hauls lately! Found a little bit of food and water, but I’ve not been coming up empty handed. Much of what I found are some big ticket items! Painkillers, a joint, some fuel-if I can sell all those off with the honey I found I’ll be good on cash! Doing pretty well, money wise. Last week’s pay check from the hospital was pretty good.

I should have enough money earned to buy a few nice things. Got everything I need for the house, so now it’s time for the luxuries. There’s a few priorities on the things I want. Getting pretty tired swapping through two sets of clothes, especially just the few pairs of underwear I got, so I’m gonna have to trade around for more. This house needs some furniture, proper or just thrown together. Really want a lamp. Got to find a lighter. I’ll need to stock up on weapons here too. Eventually, things are gonna be made real cozy for me. Hopefully, I’ll even have the house made up presentable enough to have folks over.