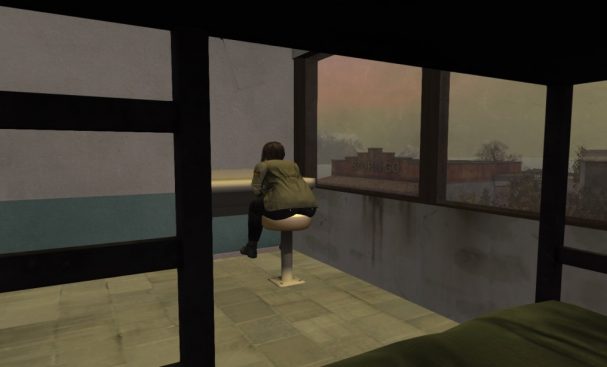 I’m back. How long has it been? It feels like forever. This whole ordeal feels like it’s been going on as far back as I can remember. It’s like the only reality I’ve truly known and the past before that now feels like a series of dreams. Only I’m not asleep and not truly awake when I dream them. Not anymore. I’m not even half alive and yet somehow I keep breathing in a world full of monsters. How long until I become one? Maybe I am and I just don’t know it yet. YET. Maybe I won’t wake up tomorrow and all of this will be over. I shouldn’t think like that. But I do. I don’t think suicide is the coward’s way out anymore. If anything it might bring closure or peace. Maybe I won’t stay dead and will come back. Maybe the next face I sink my teeth into is that of my sister or K or Danny…? That is what stops me. It’s the ONLY thing that stops me. I wish I had the strength to give up… I can’t think about that right now.

A lot has happened since I last visited these shores. I feel like I have lived so many other lives. In many ways I did. There’s things I had to do to survive. Things I wish I could forget. I’m not even sure why I tried. Maybe the will to survive is stronger than my pride I guess. Or maybe my sanity. I’m physically alive. I’m not curled up in a ball rocking back and forth in a corner someplace on the verge of being eaten like chow. I feel like I should be. For all I’ve seen and done and had and lost I feel worse somehow that I’m NOT crazy. Maybe I am just for returning. I don’t even know why I bothered to come back here. Come back to what? Why? For how long this time? Is this finally the end of the road for me? God, if there is one (and I seriously doubt it) let it be the end now. I cant run anymore. There’s nowhere else left. I know, I looked, or else I wouldn’t have come back here to Arklay after all this time.

I lost my boyfriend. I lost my sister. I lost my kids. I lost Danny. He was a surprise. The only “good” thing to come out of this whole ordeal was meeting him. Being with him. I never thought I’d love again but I did and a biker of all things. Yeah he was a Redneck in the truest sense of the word, down to the dated tattoos and lazy drawl, and so-not the kind of guy I ever would have looked twice at before the world went to hell. It’s funny how life changes you and how much life itself has changed. Would we have been together if the outbreak hadn’t taken over? Probably not. I was happy in my suburban life with K and the kids. They’re gone now too. The common factor in all their lives was me. I’m alive and they’re all dead. I can’t help but feel responsible and guilty that I’m here and they’re not. That if it wasn’t for me at least K and Danny would still be alive. I want to be believe that. It’s hard. There’s only so much loss one person can take. It hurts to think about but with so much time there’s nothing left to do but think. And keep going. I don’t want to be alone here. I don’t want to lose anyone else. It just seems inevitable if you get close to anyone now one or both of you will die. Or turn on you to either take your life or what little you have left in it. Is this what we’re all fighting to stay alive for?

My god I’m so lonely. I’m cold. I’m tired. In every sense of the word. My brain just won’t shut down so I just keep writing as I think. None of this makes any sense, I know. I’m rambling and probably repeating myself. I have to. If I don’t I will forget and if I don’t die tomorrow I’ll need to remember. If I keep living I’ll need these pages or end up no better than those things staggering around outside. At least they seem to be lesser in number now, that’s one good thing. Now the only monsters are the ones with a pulse and a need to take what they want by any means necessary. Man shows his true face after all and it isn’t pretty. But there are good people out there too. Some, but not many. Not enough anyway. Every day the world gets smaller and the vultures are circling.

The worst part is the not-knowing. If I knew for certain that Lola or K or Danny were dead, truly dead, I could mourn and let go, not be looking for anyone that looks remotely like them and getting my hopes up only to be crushed each and every time it turns out to be someone else. What if they walk in here tomorrow and I kill myself tonight? How can I leave my sister alone? She’s been alone and away from me far too long. I miss her. I miss K’s arms and Danny’s guiding presence. I miss my kids. I miss their cries. I even miss their mess and tantrums. I was frustrated once now I’d give the world just to be back there in the moments I thought I hated. But my world now is small and empty. I don’t have anything left to give beyond my life. Right now that’s not worth much of anything.

Arklay is as welcome to me as it was before in terms of people or the presence of familiar faces. I don’t recognize anyone. My old camp is long gone. Things have changed. Some things haven’t. I’m sitting here back in the hospital again, the same place I started my journey so long ago, as alone as I started out. The soldier I met earlier, Claire, seemed nice enough, though admitted she’s probably killed more than anyone else on the island (I can’t remember the exact words, I was exhausted after all). She gave me water at the camp where her tent and soldiers were stationed and led me back to the hospital. It was a bittersweet feeling to see it again. The nurse that met us had more life about her than I’ve seen or heard in a long time. I don’t know how she could be so perky – or smell so clean. Doesn’t that attract those things outside too? How can anyone smell of anything that isn’t dead or rotting or burning in this world turned to shit? Maybe there’s still so much for me to learn but they’re lessons I don’t want or need right now. Right now I just have to make it through the night. Minute by minute, hour by slow agonizing hour. Time moves so slowly now.

I keep looking out the window waiting for someone that looks like my sister or someone I know, or even a great flotilla of armed forces at this point just to signal that it’s all over. That things are under control and getting back to normal. A new kind of normal maybe. I could handle that. I can’t keep living on my feet like this. I can’t keep living – and yet still I do. I keep doing things I don’t want just to see one more day that’s as lonely as the one before, only worse. One day living is one more than my kids didn’t get, that my sister didn’t get. It’s one day further away from happiness and closer to forgetting.

Please tell me it’s going to get better than this?