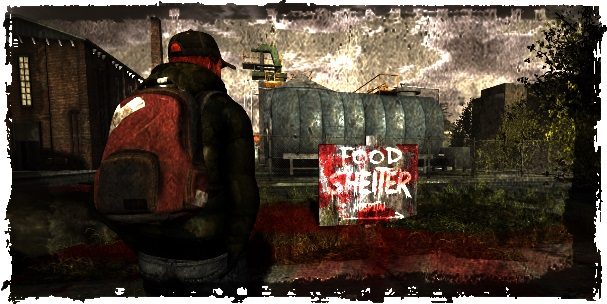 I stood in the massacre as a survivor of what happened the other day. Can’t help but pass through it on my way to the AES. Every time I walk by though, I just got to stop and remember what happened. That battle isn’t a memory that’s easy to lose. There was nothing like it that I’ve experienced before. Doubt many here have. It ain’t every day folks put down not one, but two hordes of zombies and live the tell the tale.

It was dozens, maybe even hundreds of the dead that crawled their way up from shore. They’d settled in down by the water for a good while, but it was only a matter of time before they found their way out. We took the initiative, and I think that’s gave them the push to come out.

We’d been tackling the issue of what to do with them dead since they first appeared during the storm. Thought up lots of ways to handle it, but a lot of them had severe drawback. Could go in guns blazing, but we’d likely run out of ammo for anything else that came our way. Could do pointy sticks, but we might lose more folks than the ones that would come back home. Fire was an option, but if the dead broke rank and spread through the city, then we’d have another problem on hand.

What was settled on was a plan Vanora and I made up. We’d take one of them generators no longer in use and put it to the horde. Likely, it’d overload the thing and bust it up pretty good. I ain’t too worried about that though. We’ve a few more of them out there as it is. Plenty of places got their generators already. If worse comes to worse, we’ll just head out in search of another one if there’s a need.

When the generator was put into action, things worked out pretty okay. Fried nearly half of the dead on the beach down below. They was wet from the rain and the river already, so the conditions were right for success. Still, didn’t take them all down. Those that were left standing just crawled up and over the ones that were put down. Folks on the cliffs made quick work of them though, and shot down all the ones that was trying to climb up.

While this was happening, I was keeping watch at our backs. Mainly, was looking out for some lost dead ones that tried to sneak up from behind. There was a few. First, they came one by one, then in pairs. I could take down those with no sweat, and the folks behind me didn’t have to worry. Then came the horde, and that was a game changer.

Couldn’t take on the whole thing by myself, so I called out to the others for help. Those who weren’t already holding the front lines fell back to assist. It was a two prong strategy then, as we was starting to get attacked from both sides! Things looked hairy for a moment, as the horde on the street got too close for comfort. We was routed and things from our current position looked bleak.

Fortunately, we regrouped and loaded ourselves into a car. Drove up to the near the AES to cut the dead off. That horde split into two then and they was much easier to handle. While this was going on, the beach was getting rocked by explosions. Someone had let loose some fuel and struck a match. There was just fire down there, fire everywhere down below, and smoke just plumed up into the skies. That, combined with all the bullets and shells flying everywhere, put an end to the whole horde.

Whole thing just had an awful smell to it. I’d say it was like barbecuing everything at once; a whole pig, cow, horse all together. When people burn, you can’t mistake that for an animal; it’s charcoal and burning hair, a side of beef and fatty pork, rot and an open sewer. It’s something that’ll cling inside your nose for days. Can still pick up that smell just thinking about it. It’s not an easy one to forget.