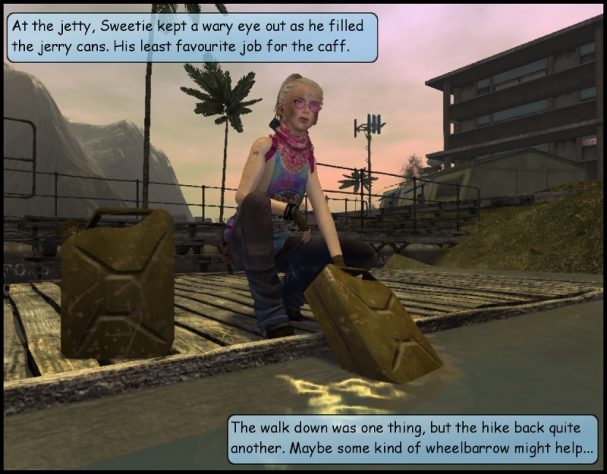 Weird times. So the new boss of the caff, Ashes, has only gone and brought some goats. There’s three of them, and they all look totally cute and I know I’m gonna end up giving them names and then how am I gonna kill them? It’s weird, in the woods, with my bow, killing a goat, no probs, in fact super pleased with myself. But give then names and it’s like a whole different kettle of fish (and why would anyone put fish into kettles anyways ffs?) Uff… gonna have to deal with that one later I guess… dunno, get pissed in the pub before doing the nasty or whatever.

And then she asked me to be like a manager for the caff. I mean I’ve like totally no idea what that actually means, but I said yeah, for sure, I mean, why not? But I’m thinking that it’s just a way for her to get me to do more work or something, and I’m only like half joking about that, but I guess we’ll see, right? But hey, I’m like a manager! Never been one of those before! Cool huh?

But the weird thing was that we were just like chatting about stuff, just a bit of goss, when I mentioned all the stories I’d heard about there being this like cannibal guy. I mean I don’t even know if it’s actually true or anything, or just like some massive wind up, but I’ve heard stories and there’s this note on the notice wall, says stuff about wanting fresh flesh, which is like totally so not cool if it’s for real and kinda seriously not funny if it’s a wind up.

But then Ashes went kinda weird on me when I mentioned it. She didn’t actually like say anything, but it was kinda like she totally knew what I was talking about but wasn’t gonna say anything, which then got me kinda stressed, coz, you know, if there’s like actually a cannibal guy here, and people actually know about it, then what the fuck! Like seriously? How the fuck does that work? I kinda had to bite my tongue big time, coz I didn’t wanna lose it with her, so I just grabbed a couple of jerry cans and went to the shore to fill them with water.